This entry was originally published on the Niagara Next blog on November 6, 2015, and can be found here.

So after I mentioned that only 20% of Niagara’s current municipal politicians were women, someone inquired whether that figure had gone up or down since the last election. Also, in my interviews with Debbie Zimmerman and Laura Ip, both mentioned the need for more women to run as candidates in municipal elections. (As I have more time for further research, I will be updating this page.)

First up, St. Catharines Councillors and Candidates by gender for the past five elections. The downward trend in the number of woman Councillors is an obvious concern, though other than 2010, the number of candidates remains relatively the same. (It should be noted that the 2010 Council finished with 3 women and 9 men, as Laura Ip replaced Greg Washuta.) 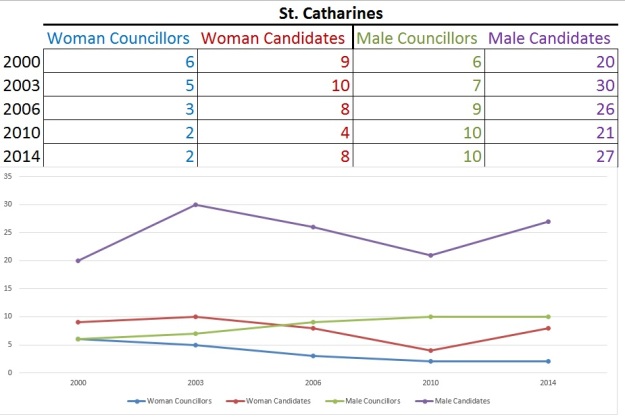 Only 8 and 7 women candidates in the whole of Niagara is pretty sad.

There are many reasons why there are not enough woman candidates and many challenges to being a candidate and a politician as a woman; however, it is plainly obvious we need to do what we can to attract more women candidates.

View all posts by Laura Ip